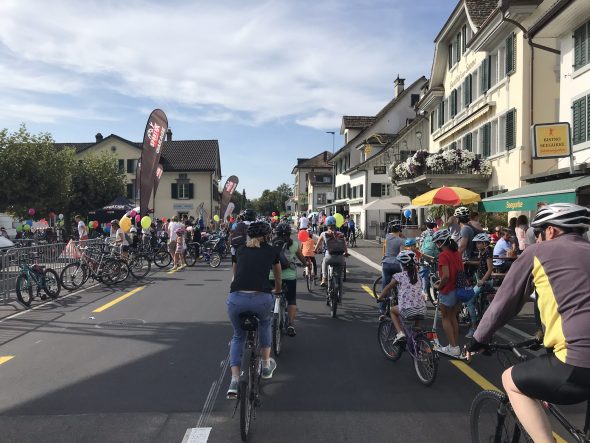 We give up a huge amount of space for roads. When you think about it, we are talking football pitch size spaces many times over covered in paving and given over to a few people. Each person in a motorised vehicle is taking up at least 25 square metres of space when you take into account the size of their vehicle and distance between each vehicle. And these vehicles are polluting and noisy too (even EVs have emissions from brake and tyre wear).

The paved road space belongs to all of us! When you get rid of the cars and buses, trucks and vans, what happens is very simple: people come out. And they come in their thousands. They ride side by side and in families. They stop to greet one another. They play music and they talk. It’s so much fun!

Foodstalls and little markets pop up everywhere. People have time to stop and look. Everyone has a smile on their faces. I know, it is a utopia of sorts, and I know the argument is of course that you still need delivery trucks and ambulances, yet time limited vehicle bans are a worthy consideration.

For one day a year, the SlowUp movement comes to Switzerland in various cities. I joined the SlowUp event on 22nd September 2019 which saw 28 km of road from Meilen to Rapperswil to Schmerikon shut to motorised traffic and entirely given over to bicycles, skateboards, roller bladers and e-bikes (up to 25km/h assistance). Let me say that again: 28 km !

The atmosphere was sensational. So many children were on their bikes riding with their families. Interestingly, a culture forms very quickly of respect for others; not everyone after all is steady on their wheels. The children can be a bit haphazard, but generally speaking everyone keeps to the right hand side of the road. Except when there are more bicycles going one way than the other, then it’s ok to bulge out on to the other lane. It’s a kind of organic adaptation. Slow speed means you have time to accommodate others. The density of people on bicycles to cars along this road, when it is normally open to motorised traffic, I worked out to be about ten to one.

This event was marked with lots of events along the route with free music, snacks and drinks. I give a massive kudos to the organisers of this event which was totally free of charge. To get agreement to block the roads from motorised traffic for two-thirds the length of Lake Zurich is no mean feat.

As an aside, I have spoken to professional city planners who have introduced successful cycle lanes in their cities. They explained to me that the recipe is very simple: build dedicated cycle lanes that are physically separated from motorised traffic; paint on the road does not protect cyclists, although it is certainly a very good first step. A metal barrier, regular plant pots, a kerb, does protect. And when you build cycle lanes, the motto stands: build it and they will come!

What do you think of time-limited motorised vehicle bans? Would you like that in your city? Please comment below