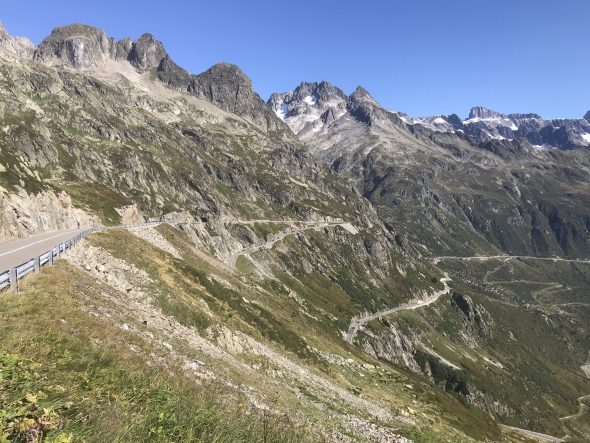 The Sustenpass is located in Switzerland and connects the canton of Bern with Uri. It is high at 2,224m and is a particular favourite for motorbikers, car drivers and of course cyclists. It is actually one of several mountain passes and hard core cyclists often combine it with two other mountain passes of similar height.

But today we focused on tackling the pass from Wassen. To those of you that drive through Switzerland on your holidays, Wassen is a little village that a lot of holidaymakers associate with long traffic jams trying to get through the Gotthard tunnel on their way to Italy.

Wassen to the Sustenpass is a 1,300m climb. It is not an especially steep climb averaging about 7% over 17km. This means you should be able to make the climb in just over two hours going at a non-race pace. You know when you reach the top as you enter a short section of tunnel and see a large parking area where all the motorcyclists are.

There are relatively few switch backs which actually means the descent is terrific with little hard braking required.

The only big downside is that if you go on a sunny day in Summer it is overrun with motorcycles. Most drive pretty sensibly but you do get the occasional nutter hammering up and passing you within a whisker. Better to go during the week. Note obviously that this pass is shut in Winter and only opens again in late May or June.

A question that I often get asked is what to wear. The important point is to look at the weather forecast at the top of the climb. Even in high summer this will be cool and if you are riding into the Autumn like I was, possibly really cold. Therefore, make sure to bring with you as an absolute minimum a wind proof jacket for the descent.

Here’s a story once what happened to me when I cycled up the Timmelsjoch in Austria (an even higher pass at 2474m) many, many years ago. It was sunny when I set off from Solden in the valley and I wore just a cotton T-shirt. I carried no jacket with me. By the time I got to the top my T-shirt was wet through from sweat, and the sun was dropping behind the mountains. That descent was the coldest I have ever experienced. It was so cold I had to stop every few hundred metres to warm up. It was borderline hypothermia. I learnt my lesson.

Final thought. You can combine the Susten Pass tour with the mountain passes of Furka and Grimsel – but you better have well rested legs! It’s upwards of 4,000m of climbing and 100km to boot. But very popular. Kudos if you try it.

Take a look at a Video I shot coming back into Wassen to get a feel for this wonderful ride.