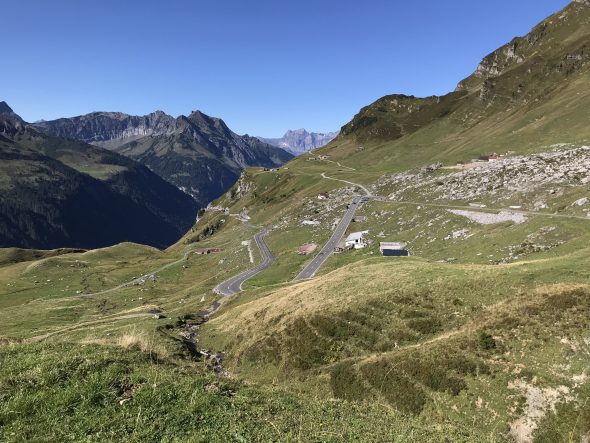 I had not counted on the cows. Many of them and beautifully coiffed with their heads adorned with flowers and emblems of the Canton of Uri and the Swiss Flag. Today was the Alpabzug or Descente des Alpages, essentially the day when the cattle descend from the high pastures to winter in the valleys.

At every village on the ride up from Altdorf swathes of cattle block the roads, their huge cowbells impossibly large yet booming out the sounds that have echoed around these valleys for centuries. If I’m honest, I quite liked the pause to watch the cattle descend as it gave a little rest to the legs.

The Klausen Pass is a top-20 climb in Switzerland at just under 2,000m. The pass connects the town of Altdorf in the Canton of Uri with Linthal in the Canton of Glarus. It is a pass that is shut in winter and only opens in May.

Hence, at this time of year if you are going to do this pass, you have to get on with it before the early snows arrive. I started early morning, at about 8am with the sun bursting over the mountains to reveal a deep blue sky and rich green valleys. It was cool in Altdorf at about 9 degrees but at the pass height it was freezing at 0 degrees. You need to think carefully what to wear. Not too much going up because clothing is heavy and you sweat, but not too little that you freeze on the descent.

I opted to wear winter tights, a base layer and a long sleeve jersey. In my handlebar bag I actually brought along a winter jacket for the descent and long fingered gloves. I even had on overshoes. The ride is quite long at about 25km. The first half has an incline of about 5% and culminates with a surprising little drop down into Unterschaechen. Ha! That will be an annoying little leg-burner on the way back!

Now the business really begins. The incline steepens easily to 10% and you start to feel the legs taking the strain.  The view remains spectacular. The Chammliberg still has snows and ice from last winter, and below it is a magnificent waterfall (a note to self – something to explore on the mountain bike) another time.   I believe this is the Schaechen waterfall, although I stand to be corrected.  It is distracting to look at.  Which is a problem, because the drop on my right is hundreds of metres to the valley floor.

Reaching the hospice you know you are not far away from the top, yet it is still 2 km to ride.  Keep going!

The post bus comes up here at regular intervals but you can hear it from miles away as it sounds the horn to warn other traffic. The road is narrow in places, especially near the top.

The top is reached and we are at 1952m. And what a great feeling too to get there!

And now the fun begins with the fast descent (YouTube video).  Remember that we descended into Unterschaechen on the way up? That is a pain for sore legs to climb back up.  But it’s only short and then we are back where we started in Altdorf.

Now a word to descending when it starts to get really cold. I opted to put on a windstopper from Gore, rather than a very lightweight jacket. The reason is I sweat a lot, and if you descend for 25km and with wind chill, that can lead to me getting a cold. What do you wear on cold descents?

This gore windproof jacket is expensive, but you buy it once and it lasts for years. You can wash them many times. The only downside I have found is that the zipper can fail (probably impatience getting it off after a ride); for that it is worth getting it repaired, and I thank my mother for doing that for me one time, bless her.

For women – see links here. There are different colours such as black and white, blue, etc (I show an example):