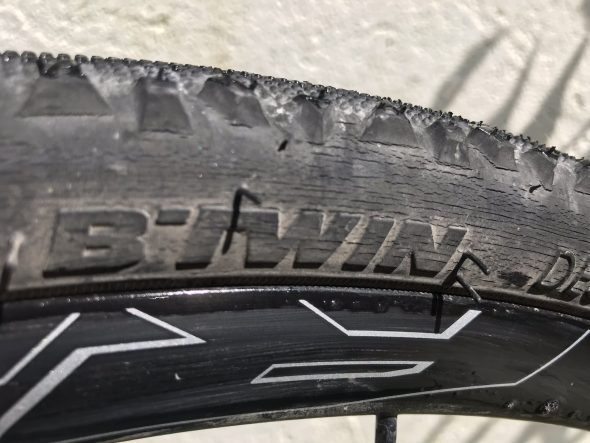 I used to think that tyres are mostly all the same quality. How wrong could I be! After three months of usage, I compare the state of two different types of gravel bike tyres, one cheap, one expensive at double the price. I am shocked to see the difference.

A gravel bike is essentially a bike that can handle unpaved surfaces such as forest tracks, farm tracks and single trails, as well as normal paved surfaces. The frame of a gravel bike tends to be a bit stronger than a road bike and there are clearances for wider tyres, often helped by the fact that most modern gravel bikes have disc brakes. It is common to see gravel bikes with drop handle bars but that does not have to be the case with some sporting flat bars too.

Three months ago we installed tyres on two bikes. The first gravel bike had Decathlon’s BTwin Trekking tyres, 700 x 38mm. These are about 680g each and have a very nice ‘micro knob’ surface along the tread. The price is attractive too at about $20. Great!

However, after three months use in warm weather in southern Italy on a range of rides doing not much more than 500 km in total, I was alarmed to see degradation in the rubber. I mention the warm and sunny weather out of full disclosure, but it is not unreasonable to assume a lot of people like biking in sunny weather.

By comparison, the second gravel bike had Challenge gravel grinder tyres. These are considerably more expensive. They are race tyres and have a chicane tread and vulcanised rubber, 700 x 38mm, 120 TPI and can be pumped to very high pressures. The weight of each tyre is considerably less than the BTwins at 375g each. On the point of weight, clearly the BTwins lose, but then paying less money is also a valid argument in favour of BTwins.

The Challenge tyres did the same routes and spent the same time in the warm weather in southern Italy. They still look today as good as new; the rear one does have a mudguard over so arguably some protection from the sun, but the front one had no mudguard and is in great condition. Now arguably, the Challenge gravel grinder tyres have a tan colouring on the walls which might be a reason for the lack of degradation. But still, if you look at the BTwin tyres, you can see that even the tread is failing.

In conclusion, I cannot recommend the BTwin tyres. The Challenge tyres are twice the price but have less weight and seem to be more durable. I feel much more confident with the Challenge tyres that they will not fail me.

What is your experience with gravel tyres?